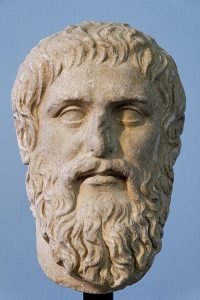 Socrates’ student and literary creator, Plato (428/27 – 348/47), stands in stark contrast to his Athenian teacher, the philosophic martyr. If, as Cicero said, Socrates brought philosophy down from the heavens into the city streets, Plato curiously used his Socratic character of the middle and late dialogs to redirect philosophy from the streets back to the heavens. In Plato’s dialogs, the reflection that should lead us to truth is indeed conducted in public in the city streets and marketplaces. But we only gain knowledge when we are led beyond those streets and marketplaces to a realm of permanent ideas or forms.

While Socrates also claimed that his wisdom consisted in his knowledge of his own ignorance, and he developed no positive systemic philosophy, Plato developed a systemic school of thought that held dominant in Western philosophy for about 1500 years. The Academy in Athens, the school that he founded, served as basis for the development of philosophies of different sorts that would proliferate after the city-state of Athens waned in power and Alexander the Great had established a Hellenic empire. Plato himself made foundational contributions to areas as diverse as metaphysics, epistemology, ethics, political philosophy, and aesthetics — all of which served as the basis for teaching at the academy.

Plato’s literary form is that of the dialog. In his works, the character Socrates draws out ideas from his interlocutors in discussions in the public square. Like many of the Greek natural philosophers, Plato thought there was a divine spark in the human — the human soul — which allowed us to access unchanging truths. This wasn’t a possession of just special individuals but of all — even though it was only rarely used well. The dialogs, though, showed how all could potentially tap their reason and come to understand truth. In the Meno, one of the middle period dialogs, Plato attempts to show how even a slave child was able to engage in simple mathematical reasoning, arriving at a correct answer to a problem, even though no one had told him the answer beforehand. He, like all of us, had a natural capacity to derive conclusions on the basis of certain presumptions. Humans are generally rational. And it is through rational reflection, Plato thinks, that we arrive at truth. The Socrates of the early dialogues demonstrates always a belief that reason should be our guide and can lead us to the truth. But in the end, he does not follow the guide to construct a full systematic view of truth, justice and so on. However. Plato, through his Socratic character in the dialogs, follows this project begun with the historic Socrates to what Plato sees as its rightful end. He offers positive views of justice, beauty, truth. He creates the West’s first philosophical system.

On the one hand, Socrates remained a guide for Plato, as the archetypical philosopher, attempting to gain truth not through an examination of the world, like the Ionian natural philosophers, but through the clarification of concepts. Yet after Socrates’ death Plato travels to the western area of the Athenian colonies where he is strongly influenced in this rationalist orientation by Pythagoreans as well as metaphysicians of the region such as Parmenedes. Combining influences from these sources, Plato develops his mature rationalist methodology. He believes we come to philosophical truths not through examination of the world but through critical analysis alone — parallel to how we come to mathematical truths.

In the areas of metaphysics, epistemology, ethics, political philosophy, aesthetics — the methodology is always the same: one is to reflect on concepts, to clarify them through argument. Doing so, the soul, the divine eternal spark within each of us, is supposed to penetrate the unchanging true ideas — ever the same and existing in their own realm of forms or ideas, separate from the material objects of this world.

Continue to Plato’s Allegory of the Cave