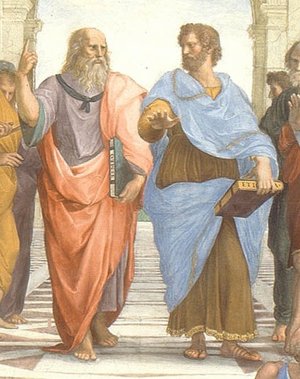 While Alfred Whitehead famously said that all of Western philosophy was a footnote on Plato, a more apt description of Western philosophy shows it playing out as a dialogue between tendencies more Platonic and more Aristotelian. Raphael’s famous “School of Athens” captures this: In the center of the painting, shown above, Plato points upward, indicating his focus on the otherworldly, eternal forms of which things in this world are weak copies. Aristotle points downward toward the earth, highlighting his focus on the need for empirical observation of the world. Where Plato, as a systemic rationalist, highlights the analysis of ideas and the attempt to reach truth through rational argument alone, Aristotle speculates only on the basis of empirical observations. Seen historically, Plato then completes in some sense the speculative tradition first clearly expressed in the philosophy of Parmenides. Aristotle hones and focuses the naturalist, scientific orientation of the early Ionian natural philosophers, but applies their empirical focus not only to questions of natural philosophy but also to questions of ethics and politics.

There is not a great deal known about Aristotle’s life. He was born in 394 BCE of  a wealthy family in Stagira, on the Chalcidic peninsula of Macedonia in northern Greece. His father was a physician for the grandfather of Alexander the Great, who Aristotle would tutor much later in life. At the age of 17 Aristotle moved to Athens, where he joined Plato’s academy for twenty years of study. He is believed to have been basically Platonic in his earliest years but to have developed important criticisms even during his time at the Academy. Upon Plato’s death, as Plato’s nephew was chosen to run the Academy, Aristotle left Athens, probably under some political threat. In this period, he met his wife, Pythias, who was the niece of the tyrant Hermias, the leader of Atarneus. Whatever Hermias’ political faults, it was with the support of Hermias that Aristotle was able to do most of his work in botany and zoology. He returned to Athens in 335 BCE to teach in his own school, the Lycium. He departed 13 years later, again likely because of political dangers — this time as many in Athens were suspicious of him given his having tutored Alexander the Great (who was viewed as a threat to the Athenian democracy) in the years that Aristotle had departed the city. Aristotle is legend to have left the city calling to mind Socrates’ death, and claiming he would not allow Athens twice to commit a crime against philosophy.

According to Ancient biographers, Aristotle wrote the equivalent of about 50 volumes, of which about 1/5 remains. His writings cover all areas of philosophy dealt with by Plato, but adding work in the field of logic, a discipline of which he is considered the father, as well as much work in the natural sciences, especially biology, zoology. His empirical approach and many of his basic perspectives were dominant in the natural sciences for nearly 2000 years, until eclipsed by a new wave of thought during the scientific revolution with better developed methodologies for specific sciences. Though his scientific work has thus been eclipsed today his works on ethics and politics as well as aesthetics and metaphysics are still very relevant.